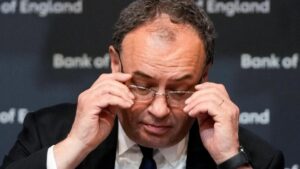 The Governor of the Bank of England has ruled out an emergency rate rise following a rout in the pound.

In a statement just minutes after a separate one by Kwasi Kwarteng, the Chancellor, Andrew Bailey said the bank’s monetary policy committee “will not hesitate to change interest rates by as much as needed” to bring inflation under control.

He added that Threadneedle Street is “monitoring developments in financial markets very closely in light of the significant repricing of financial assets”.

But Mr Bailey stopped short of announcing an emergency meeting of the committee this week and suggested it would stick to its next scheduled gathering in November.

After his statement was released, the pound plunged again – despite having stabilised earlier in the afternoon.

It came moments after Mr Kwarteng promised to unveil a plan to bring UK debt back under control after his mini-budget sent the pound crashing.

His huge package of tax cuts is designed to boost the economy but has spooked investors, who fear they will run up public borrowing to unsustainable levels.

Mr Kwarteng this afternoon attempted to calm the markets, with the Treasury promising he will set out a plan to bring debt back under control on November 23.

Burnout Britain: How UK employers can recognise the signs & symptoms of burnout

Buyers could need planning consent for a holiday...

Elon Musk’s satellites to be part of UK...

How Faris Abusharif Is Helping to Evolve the...

Arti Modi Discuss How She Is Helping Change...

November 30, 2022
Join The Exclusive Subscription Today And Get Premium Articles For Free
Your information is secure and your privacy is protected. By opting in you agree to receive emails from us. Remember that you can opt-out any time, we hate spam too!